From the Chief Medical Officer 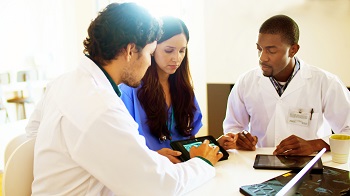 Hyponatremia Correction - "Between a Rock and a Hard Place"

Is it time to raise awareness of a "new" trend? Like we did last fall for renal calculi and underlying UTI? Maybe so, since we have had four lawsuits in the past couple of years related to complications (overtreatment) of hyponatremia.

We all learned the complication of rapid over-correction of hyponatremia is a severe neurologic condition called Osmotic Demyelination Syndrome (ODS). This used to be called Central Pontine Myelinolysis but the name was changed to reflect the fact that more of the brainstem is affected than just the pons. And while the exact mechanism causing this condition is not fully known, there is a destruction of the myelin sheath in the brainstem. This causes a myriad of neurologic problems including dysarthria, weakness, confusion, paresis, and coma and even locked in syndrome. And these often profound deficits are usually irreversible.

We also learned in our training about the complications of inadequately treated hyponatremia, which can lead to seizures, coma, and brainstem herniation, especially in acute hyponatremia.

Because of that, the treating physician has a very difficult task. You have to determine the severity of the hyponatremia, which is the actual number, but also, the symptoms exhibited by the patient. Also, is this acute, chronic or acute on chronic? Then you need to initiate treatment which will raise the serum sodium less than 8 MeQ over a 24-hour period. When do you treat with hypertonic saline? Desmopressin? Fluid restriction? And if you overshoot, there may be ODS in the patient’s future—especially if there is underlying alcoholism, malnutrition, hypokalemia, etc.

To make matters even more difficult for the treating doc - you can do everything correctly- and still overcorrect. This has to do with the patient’s own auto correction of water excretion and sodium retention.

So what is the point of all this? GET HELP! Do not go at this alone. The complications are very significant for patients (and costly with lawsuit amounts in the multimillions). And again, even when doing things correctly, outcomes are very difficult to predict. Physicians should get consultative guidance ASAP before starting any treatment. Obtain and document pharmacy and specialty physician consultations. And while it may or may not alter the outcomes, you are doing the best you can for the patient, while giving yourself some protection if there is a bad outcome and a lawsuit follows. You can say that you have done everything you could have done. So GET HELP!